A view from London Central General.

GMB Congress 2019 occurred last week and our delegate, Dave Levy has written a report of his experience there. He has published his report on his blog. The GMB publish the proceedings of Congress on their YouTube channel.

Dave spoke on the CEC special report on Brexit, where he supported our motion to campaign to repeal the restrictive Trade Union laws, Biometric Door Controls, Knife Crime and the Crisis in Venezuela. 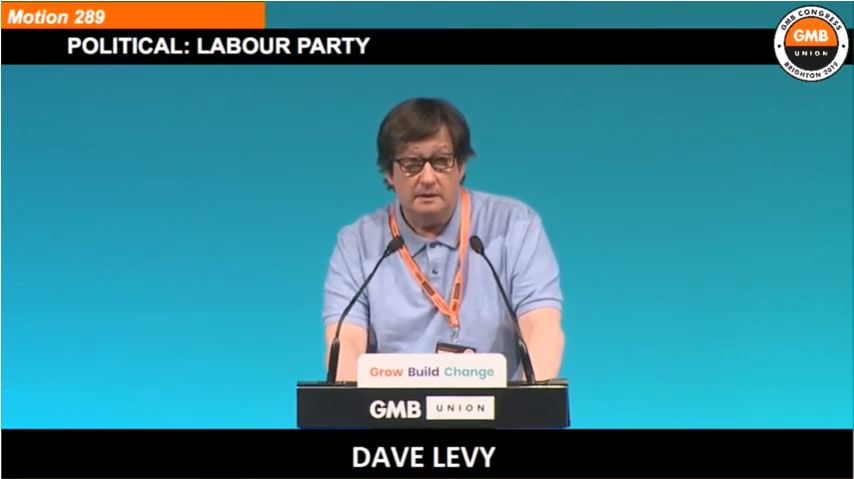 Two other important debates covered Shipbuilding, Steel & Gas and Leroy Rosenior from Show Racism the Red Card. The first offers important lessons for those of us in white collar jobs and also shows a need to understand the science behind climate change and its remediation, together with he need to show solidarity with those working in engineering businesses.

Rosenior made a powerful campaigning anti-racism speech which warrants hearing.

The debate on Venezuela was on a motion calling for Maduro’s removal; Dave made a speech calling for solidarity with the people of Venezuela and for opposition to illegal military actions.

Dave’s blog points at four speeches, of interest, , Esme Choonara from London on NHS Pay, and Stephen Alexander from the Midlands & East Coast Region on taking back schools from Academy Trusts and another two speeches on day four, Cathy Pindar on access to Arts and Culture, and Victoria Ugwoeme on Saying no to Honour Violence.

Congress voted to limit the number of motions that can be moved by a branch to three; this would not have been a problem this year, but last year we sent six to Congress. London Region spoke against this change but it was carried.

There are a number of hyperlinks in this article if you want more.